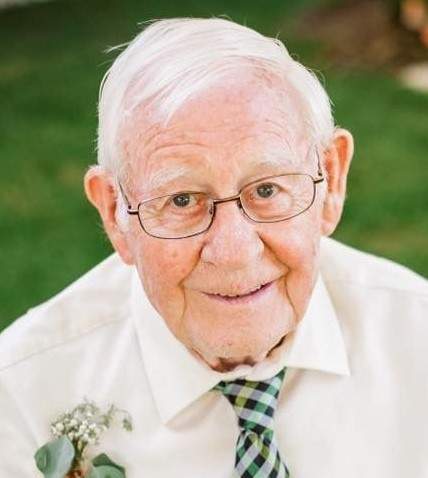 Nathan Carl Friedli (Nate) died at Logan Regional Hospital on Wednesday, June 9, 2021 from pneumonia. He was 91.


Nathan was born on June 22, 1929 in his family home to Carl and Elizabeth Friedli. He was the oldest of four children. At the age of 14, he became the man of the house when his father passed away. Throughout his life, he has always taken care of his family, whether it was in his childhood, in his married life, or with his grandkids. On June 7, 1950 he married his high school sweetheart, Sharon Seamons in the Logan Temple for time and all eternity. Together they would rase three children whom he took much pride in.

After he graduated from high school, he was hired by W. F. Jensen Candy Company of Logan, where he learned and perfected the art of candy making over 28 years. He made everything sweet and his claim to fame was making candy canes that graced many candy shops throughout the western United States. His family and friends affectionately called him The Candy Man. One of his favorite songs was “The Candy Man Can” by Sammy Davis Jr. because he felt like he was the only one who could make them just right. A beloved Christmas tradition was gathering as a family in the kitchen and making all the candies that he used to make and him teaching us just the right technique to make them to perfection.

Nathan loved airplanes. From boyhood, he has built model airplanes as a hobby. His precision to detail and a steady hand led to many planes put up on display in his house. His children affectionately called his workshop “the cockpit” while his grandkids were taught to be very careful around them in case they were to get damaged. He belonged to the Logan RC club and spent many afternoons out at the Logan airport flying his planes.

In his later years, his wife Sharon convinced him to try out square dancing and after one lesson they were hooked. They square danced for many years, traveling all over the west to compete in competitions and winning a few medals. They would often design their outfits together. A fond memory of the grandkids, was turning on Alan Jackson and twirling around waist high in Grandpa’s cowboy boots, smothered in his cowboy hat, and Grandma’s frilly petty coats.

Nathan is survived by his three children, Dennis (Diane) Friedli of Logan UT, David (Lee) Friedli of Monterey, California, and Jerilyn (Paul) Parks of Hyde Park, UT, with three grandkids and one great-granddaughter and his brother, Delwyn (Joy) Friedli of Providence, UT. He is proceeded in death by his beloved wife, Sharon, his parents Carl and Elizabeth, his brother and sister Milton and Wilma, and an infant son. Grandpa we love you and you will be dearly missed.

A viewing will be held on Thursday, June 17 from 6:00 - 8:00 pm at White Pine Funeral Services, 753 South 100 East in Logan. Funeral services will be held on Friday June 18th at 11:00 am with a viewing from 9:30 to 10:30 am at White Pine. Interment will be in the Logan Cemetery. Memories may be shared with the family at www.whitepinefunerals.com

To order memorial trees or send flowers to the family in memory of Nathan Carl Friedli, please visit our flower store.