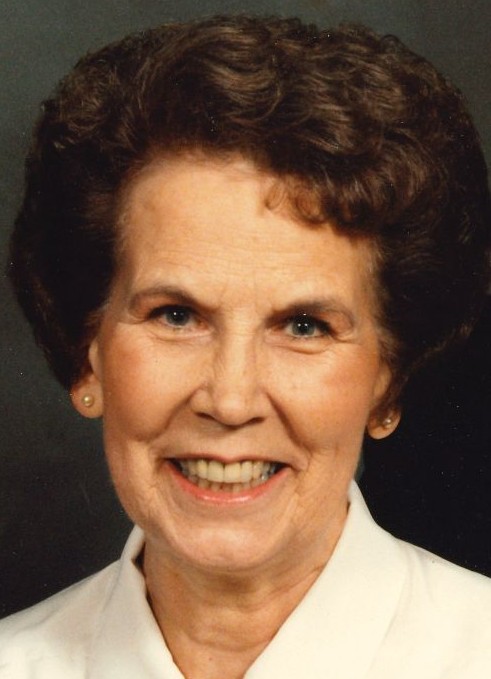 For those who would like to live stream the service, please use the following link: https://zoom.us/j/98926362067?pwd=TGlTWUhxWHROYnla...

Mary was born April 26, 1925 at home in Franklin, Idaho, the seventh of nine children of Louis Perley (P. L.) Robinson and Lillie Jane Atkinson. She was named for her grandmothers Mary Elizabeth Robinson and Mary Handy. At 18 months she contracted scarlet fever and almost died. Her early life during the depression on a farm provided that she always had food, but otherwise it was difficult with the home heat coming from a large coal stove in the kitchen, no indoor running water, and no electricity until she was about 8.
She loved the small Franklin School which housed all 12 grades. Her high school class consisted of only 18 students so she was a cheerleader, ran relays, pitched on a ball team and played all the sports. She was selected as the Junior Prom Queen. She first met Dell Lewis at the Idaho Days in June 1942 during her senior year. From there they dated exclusively most weekends at the Persia Anna Dance Hall in Preston and she got her engagement ring the day she graduated from High School. On November 16, 1943 they were married in the Logan Temple, an earthly marriage lasting 67 years until Dell passed away.
The Matriarch of her large family, she has persevered an additional 11 years. Her lifetime vocation was homemaker and mother where she loved each one of her family passionately. She started working to finance her son’s mission and later worked many years at Sweetbrier, Lady Faire, and Shonnee’s Floral because she loved to interact with the public.
As a faithful member of the Church of Jesus Christ of Latter-day Saints she served in many callings in the Primary and Relief Society including nursery leader when she was 80. She and Dell were called to serve together as officiators in the Logan Utah Temple in 1990 and continued for over 15 years.
On July 1, 2021 after a day with family, she rejoined her eternal companion, Dell; a wish she had held for the past 11 years. She will always be remembered for her humor, quick wit, and feistiness as well as her rolls and plates of homemade candy she handed out to all who stopped to talk. She leaves behind her three children: William Darrell (Joyce), Mary Jeanne Briel (Don), and Ann Haslam (Brent); 13 grandchildren, 33 great-grandchildren, and 3 1/2 great-great grandchildren. She was preceded in death by her loving husband, Dell, and 8 brothers and sisters: Georgia, Maurine, Donald, Jack, Howard, Vada, Louis, and Carl Jay and their spouses.
It was truly a life well spent.
A graveside service will be held on Friday, July 9, 2021 at 12:30 pm at Providence City Cemetery (925 River Heights Blvd, River Heights).

To order memorial trees or send flowers to the family in memory of Mary Robinson Lewis, please visit our flower store.