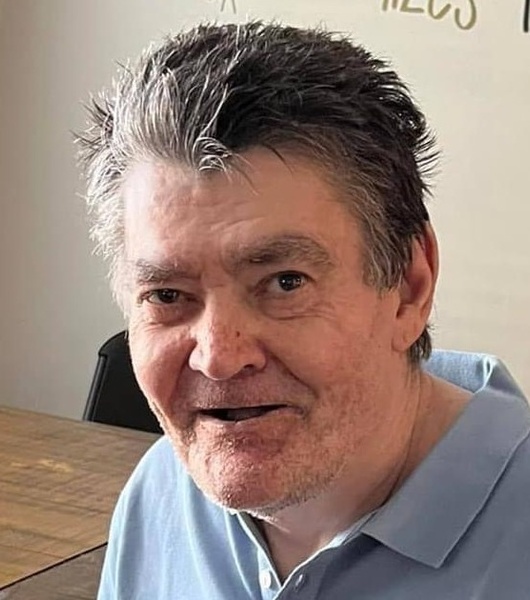 Floyd Hardman passed away peacefully on August 10th, 2022. Floyd was born on April 4th, 1955  to Joseph and Oneda Hardman of Mendon, Utah. That same April in 1955, the very first McDonald’s, opened in Des Plains, Illinois. Might be just a coincidence? But we think not! Floyd grew up in Mendon and lived there most of his life on the family dairy farm. It was discovered early that Floyd would be living with some challenges. But that did not deter Floyd's mom and dad, Oneda and Joe from giving him the best life they possibly could. Joe would take him up on the farm and Floyd would help with chores, help haul hay and ride on the tractor. Floyd also had freedom in Mendon's small community to go for walks, go get a pop at the pop machine and swing on the swings at the park, which he enjoyed and did frequently. Floyd also loved grocery shopping with his mom at Macey and he’d get really excited when it was shopping day!  After his dad passed away Oneda took care of Floyd on her own until she was 91 years old! The decision for Floyd to move to a group home was not an easy one, but as Oneda’s health declined, it seemed especially important for Floyd to find a new place to call home. Floyd moved to Chrysalis in the spring of 2018. No one was sure how it would go. We were all pretty nervous. But with the help of the caring staff at Chrysalis, Floyd began to feel at home. One funny side story- whenever people would go to visit him and his mom in Mendon, he was  fine having visitors, but after about a half hour or so he’d always ask abruptly “Is it time for you to go now?’We’d all laugh. But that’s when we knew Floyd had had enough visiting!  After he moved into his new home at Chrysalis, John and I had gone to visit for the first time not knowing what to expect. It was a little tense at first then about a half hour into our visit Floyd asked us “Is it time for you to go now?” That’s when we knew Floyd had really found his new home. The staff at Chrysalis has made it possible for Floyd to have a wonderful life these last 4 years. They have treated Floyd and our family…well…like family. He has friends, roommates and caregivers who have loved him dearly. We know how devastating this is for them also and so many others in Floyd’s circle.

On a happier note there is so much to say about Floyd…so many kind, gentle, funny, happy memories. As a kid Floyd would dress up in his mom’s wig and pretend to be Flip Wilson’s Geraldine! For those of you who don’t remember that show - Flip Wilson was a black man and Geraldine was his fast talking, sassy, female alter ego! That sure  would have been something to see! Floyd also loved, loved, loved Coke! Diet Coke! Anything Coke! We teased him that he needed a sign that said “will work for Coke!” Floyd didn’t care much for school but he loved cartoons. Popeye, Scooby Doo and Bugs Bunny in that order! He would often ask with a gleam in his eye “Is there such thing as Popeye?”. And wouldn’t you know it…THERE IS SUCH THING AS POPEYE! Sure enough…the cartoon Popeye was based on a real live sailor by the name of Frank Fiegel. Frank was a salty, old,  sailor who wore a cap and smoked a corn cob pipe. He was incredibly strong for his size a stature. From birth he had a condition that made one eye bigger than the other, so he got the nickname “Popeye”. But his most endearing trait was that he loved being kind and always did so in spite of being seen as scary by others. E.C. Segar, a cartoonist in the early 1900’s met Frank in a bar and he knew that moment he had just met his new cartoon character “Popeye”. So for the record Floyd…there is such thing as Popeye! He actually was a whole lot like you! Strong and kind to the end…in spite of his challenges, and in spite of the judgments and perceptions of others. Yes Floyd, both you and Popeye…strong to the finish! May you rest in peace dear Floyd, our kind, and gentle soul. You will be greatly missed.

A graveside service will be held on Saturday, Aug. 20th at noon at the Mendon Cemetery. Final arrangements are being handled by White Pine Funeral Service in Logan.

To order memorial trees or send flowers to the family in memory of Floyd Hardman, please visit our flower store.