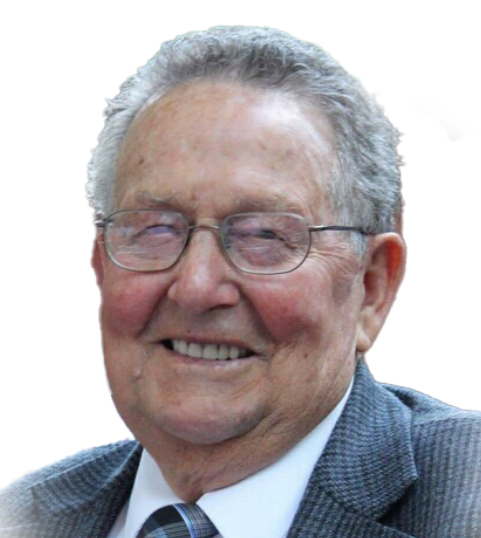 Don Wasden Bailey was born to Olive Boylan Wasden and Leslie Bradshaw Bailey on August 20, 1930. He passed away peacefully on December 24, 2021 at Maple Springs care facility in North Logan.

Don grew up on the family farm east of Wellsville where he was born. He worked with, and was taught by, his dad and his grandpa Bailey. The farm work was done with a team of horses; the first tractor was purchased when he was about sixteen years old. Summers were spent living on the dry farm in the foothills of the Wellsville Mountains, tending crops and cattle.

Don was inducted into the United States Army in 1951. After basic training at Fort Belvoir, Virginia, he was home on leave for fourteen days. He and his high school sweetheart, Margaret Wyatt, decided to get married. They were married in the Salt Lake Temple four days before he left for a year-long tour of duty in Korea.

Following his discharge, they came home to Wellsville, and purchased the farm next door to where Don was born. It was here that he began his life-long dream of raising cattle and kids.

Don worked various jobs while farming on the side, but his heart was always on the farm. Around 1965, he purchased thirteen dairy cows and began giving full-time attention to his passions-the farm and his family.

Through careful stewardship and wise decision-making, the dairy herd grew and prospered. Don was awarded the “Co-operator of the Year” award from Cache Valley Dairy Assoc., and the Service to the Dairy Industry award by Cache Dairy Herd Improvement Assoc. He served eighteen years on the Utah Dairy Commission and was instrumental in establishing a positive working relationship with the Utah Beef Council. He served as chairman and vice-chairman of the Council.

Don also served on the ASC committee, the Utah Dept. of Agriculture Diagnostics board, and on the Zions Bank Advisory Board representing agriculture in the county. He was a member of the Wellsville Lions Club for over thirty years, serving in all the offices. He served for many years on the Board of Adjustments for Wellsville City. Don and his daughter, Diane, had the privilege to travel back to Washington, DC with Utah Honor Flight in October 2016. As an active member of the Church of Jesus Christ of Latter-day Saints, he served in various callings throughout the years, including being a dedicated and faithful home teacher.

Don was preceded in death by his parents, his brothers Reed Wasden Bailey and Lee Wasden Bailey, and a brother-in-law Joseph Paul Bailey.

He is survived by his wife, Margaret, of Wellsville, his children Sandra (Paul) Garrett, Kathy (Russ) Piggott, Reed, Diane (Darren) Roundy, all of Wellsville, and Jan (Kirt) Lindley of Hyrum; fourteen grandchildren and twenty great-grandchildren. He is also survived by his sisters, Karen (David) Dickerson of Pleasant Grove, Olive Tracy of Roy, and Becky (Paul, deceased) Bailey of Wellsville, a sister-in-law, Shirlene (Lee, deceased) Bailey of Logan, and many nieces and nephews.

Don’s children and grandchildren greatly appreciate the lessons that were taught by example: work hard, take care of your stewardship, finish what you start, be passionate about what you do. We are grateful for his dedication to, and love of his family. He is already greatly missed, but we are grateful for the Christmas Eve blessing that allowed him to be home for Christmas.

We express our gratitude to all those who cared for, and befriended our dad, and those who have supported us through his loss. We are especially grateful to the staff of Maple Springs, Dr. Daniel Sharp, and other healthcare professionals for their compassionate care and concern for him, as well as for us. We express our thanks to Luell Perrett, who was a devoted friend and support for Dad, right up to the end.

To order memorial trees or send flowers to the family in memory of Don Bailey, please visit our flower store.